The turn of the season steals summer friends away like a heartless thief; not a thought spared as the creak of closing shutters and dying laughter echoes down an empty promenade.

A more determined wind froths up white caps on a sea that darkens as quickly as the evenings now and rivals the sinister tides and black hearts that have washed up in this town before. But they’re different somehow. Colder. More harsh and ever-bleaker. They’re not for turning, hopelessly lost.

It’s a perfect place for a desperate tale, a story that interrupts the beat of a heart and freezes a soul. It’s the perfect place to lose yourself and your way – if you haven’t already.

It’s written all over the face of this town – just like the scrawled graffiti on the station walls – its lines of worry and fear. Etched into the invisible veneer that stops the innocent seeing the truth and keeps them coming back for more.

Like the murky waters that come and go, come and go, staying a little longer each time and leaving something of themselves behind, the sun-kissed fun-seekers slowly turn like autumn leaves, passing through the shades and hues until there’s but one colour left and it’s as opaque as the night. By then, it’s too late. They have to stay.

Bound to an eternity in Wonderland. Banished to a helter-skelter hell. Stuck on the fairground ride that never stops. Forced to listen to the tin-can laugh of the policeman with the wide eyes, shiny pink cheeks and the frozen smile. Better watch out, kid. Better not misbehave. We know where you are and what you do. We know what you’ve done. 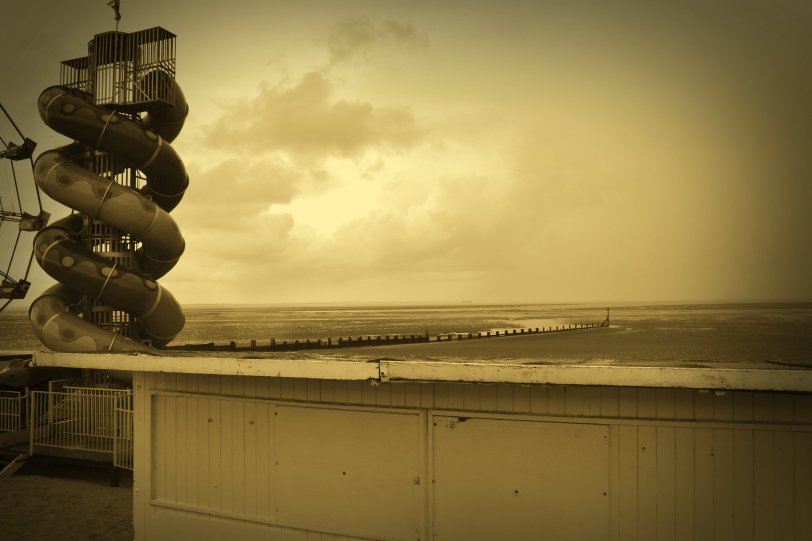 Go ahead, you can scream if you like, they won’t hear – can’t hear – above the crashing of the waves against green-black sea wall and roar of the water in their ears. It’s quiet under here, under this sea – and black. Did I mention it’s black?

Look at their smiles, how happy they are, how oblivious. They laugh and wave as the wheel spins slowly against the sombre autumn sky, the baskets rocking and lilting on the not-so-warm breeze, the too-slow plink and plonk of a tired carousel tune accompanying them round as they go. Round and round, round and round, round and round. Slate-grey sky, moss-covered rooftops, shops, tarmac floor, rusted railings, sand. Woah, steady as you go, don’t swing too far. Up we go again! Same old canvas, same worn-out town, one more go on the merry-go-round.

It’s getting colder now and it’s not fun anymore. The skies are growing dark and your heart doesn’t soar quite as high as it did before. You want to get off, you’ve had enough for this day.

But the ride doesn’t stop and the tune goes on, the wheel still judders around and the crowds move slowly away, like wolves from picked over carrion. Nothing to see here anymore, move along.

Shops close and the old man bent like a question mark over his broom sweeps the last litter off the streets. He doesn’t see you as he turns the last light off and that one remaining glimmer dies in your heart. You’re all alone now and it’s cold, so cold. The chatter from the basket behind you falls silent as you swing helplessly around to see that there was never anyone there. Just you, the night and the sea. Always the sea.

Your saline tears mingle with salt from the brackish wind that stings your cheeks as it sprays you with a hissing kiss and whispers to you from behind: I’ll never leave you.

You see, you have to stay. You came here, you wanted to come to Wonderland and now, you belong. You can never go home. This is your home.

Let me play you a tune, you might have heard it before, but never mind, here goes. Get used to it, listen. It’s your song now…